With over 20 years of manufacturing and sales of comparison microscopes to forensic laboratories in hundreds of labs in the United States, a common topic we discuss with customers is grant funding opportunities available to help in purchasing their equipment.  The following list is a starting point of funding opportunities most commonly used to purchase such equipment:

Note:  In fiscal 2020, all state and local forensic capacity enhancement programs previously managed by NIJ moved to the Bureau of Justice Assistance.

With this solicitation, the Bureau of Justice Assistance seeks proposals for competitive funding under the Paul Coverdell Forensic Science Improvement Grants Program (the Coverdell Program), which awards grants to states and units of local government to help improve forensic science and medical examiner/coroner services.

This program provides funding to states and units of local government with existing crime laboratories that conduct DNA analysis to increase the capacity of publicly funded forensic DNA and DNA database laboratories to process more DNA samples, thereby helping to reduce the number of forensic DNA and DNA database samples awaiting analysis and/or prevent a backlog of forensic and database DNA samples.

Funding under this program supports the following purposes:

The 1122 Program, owned and managed by the Department of Defense, allows states and units of local government access to GSA schedule contracts to purchase equipment to support counter-drug, homeland security, and emergency response activities including forensics.

The Debbie Smith Act creates the primary program to end the backlog of untested and unanalyzed DNA evidence.

The Debbie Smith DNA Backlog Grant Program provides funding to support public crime laboratories’ work to build capacity and process DNA evidence, including evidence collected in rape kits. Since its enactment in 2004, the Debbie Smith Act has been renewed twice with overwhelming bipartisan support. While the Debbie Smith Act is authorized to provide up to $151 million in funding per year through Fiscal Year 2019, Congress appropriated just $117 million in FY 2015. Through amendments passed in 2013 as the SAFER Act, the Debbie Smith Act raised the minimum amount of funding that must go to testing and capacity-building activities. In addition, the Act supports audits of evidence awaiting analysis at law enforcement agencies and charges the Justice Department with the task of developing national testing guidelines.

“Since 2004, the Debbie Smith Act has had considerable success. According to advocates, almost 200,000 sexual offenders have been identified, and over 40% of all DNA matches since 2005 were because of resources that became available because of grant money.” ABC News

“The current [Debbie Smith Act] bill authorizes the Justice Department to spend up to $151 million in grants to states and localities for costs associated with testing DNA evidence, to include employee training and equipment for labs to increase their testing capacity.” Washington Post 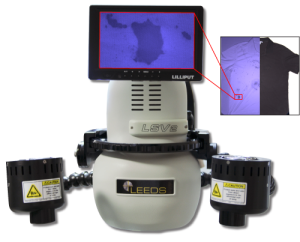 Based on the statement from the Washington Post, forensic labs may be able to purchase equipment, such as Leeds LSV2, using Debbie Smith Act funding.

Per this solicitation, laboratories can “purchase equipment to be used to increase the capacity of a non-DNA discipline with an overall demonstrable goal of decreasing DNA analysis turnaround time.” The Evofinder® Automated Ballistics Identification system, which Leeds represents exclusively in the United States, can qualify for purchase under the EI&CE program.  In laboratories where bullet and cartridge samples from a crime scene need to be matched prior to completing the DNA evidence processing, the Evofinder® can facilitate this process by providing a tool capable of quickly scanning and comparing both sample types to compare samples from a crime scene.  By reducing the backlog and waiting period for sample comparison, DNA evidence can then be processed in a more timely fashion.  At the same time, scanned samples can simultaneously be compared with any other sample previously entered into the Evofinder® database to show associations between new evidence samples and those collected from previous crime scenes.

rapidly view, capture, and document bodily fluids, victim bruising, trace evidence, accelerants, explosives, and gunshot residue, could qualify as such equipment to be purchased under this same EI&CE program.

Likewise, Leeds’ Trace-Z Comparison Microscope system could also qualify if a lab has encountered a delay in processing of trace evidence on cases that were awaiting further DNA analysis; or if the processing and analysis of the trace evidence lengthened the time for a case that had a DNA component to be closed.

Leeds offers a competitive trade-in program if your lab is interested in trading in old microscopes towards the purchase of new Leeds’ products.